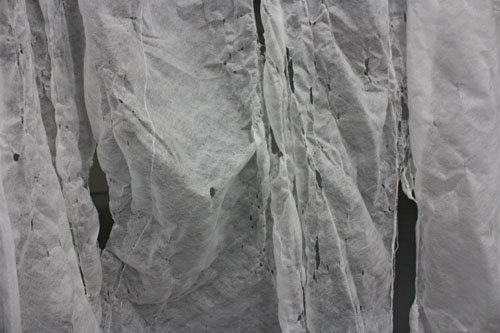 Posted at 16:40h in GROUP SHOW EMAP by Alice Trocellier

Simply there, a curtain hangs in the exhibition space, giving no indication of action. We are denied an explanation as its performative character manifests shortly, with a thud of a water pump being activated.

Curtain, first shown in 2008, was revealed in 2019 at V2 in Rotterdam once again after more than ten years. Simply there, a curtain hangs in the exhibition space, giving no indication of action. We are denied an explanation as its performative character manifests shortly, with a thud of a water pump being activated. The curtain is made of polyvinyl fabric, a specific type of textile that once in contact with water contorts, deforms, to finally evaporate and disappear completely.

From Petra Vidović’s text Sediments: “The idea of the curtain is common, it has its dramatic connotations that irresistibly call to mind Polonius and Dorian, but in the case of Vujičić’s Curtain it isn’t hiding anything, it is here for itself, its own derivative. During the exhibition,Curtain does not exist, only the spent remains of its being are visible. The disappearance of the work is a better solution for the artist than its completion: a finished work is Vujičić's biggest misgiving.”

Silvio Vujičić
graduated at the Academy of Fine Arts in Zagreb and the Faculty of Textile Technology in Zagreb. As a visual artist Vujičić is interested in the cultural position and construction of fashion, process of transformation with crystallization, corrosion, blossoming, viruses, etc. All these techniques are manifested in clothing, prints, drawings, performances and installations that invert the “natural” position of things and produce visions that are more related to undefined desires rather than to predictable pleasure. Silvio Vujičić is looking for processes in which specific technologies of art and science get mutually infected so as to produce hybrid concepts, feelings, and techniques.