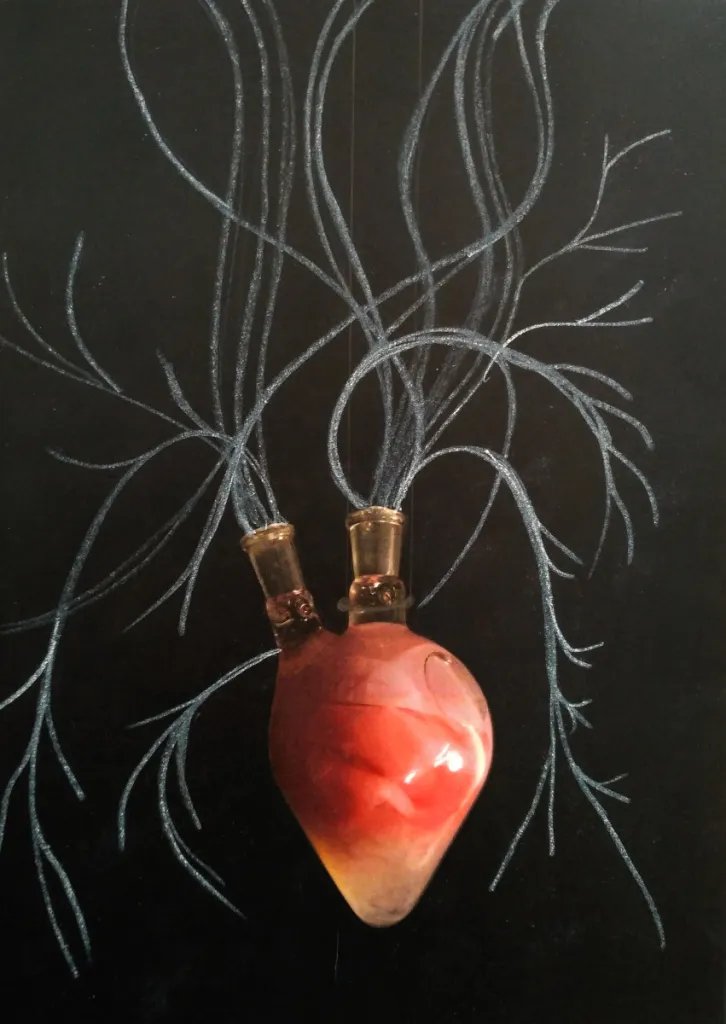 This project reasserts the importance of contraception and hormonal therapy. The sexual steroids contained in the hormone contraceptives modulate the human sexual organs to prevent pregnancy. However, these same molecules can trigger the endocrine system of other organisms. On this basis, Wombs asks how the contraceptive with a base of progestogen that the artist takes, can link her body to others, more than human. Claiming the vulnerability and the toxic incarnation, Wombs urges to rethink in a critical way the discourse on sexuality and contraception as an experience exclusively human, closed in her own body. In W.02 and W.03, the slugs are hermaphrodite allies of the exploration of interior and exterior of the carnal desire. Science doesn’t succeed if terrestrial slugs are affected by mammal sexual steroids. Different species show elaborate mating behaviours, such as suspend choreographies or throw love darts in the body of the partner. In the photo series W.03, a slug called Branko is a hermaphrodite ally in the exploration of a possible hormonal links. In the performance, the artist is lying down on the ground while Branko slips on her back un a silent game of mucus, skin texture, bones, cavities.

The exhibited sketch belongs to a series of drawing that Margherita Pevere created while developing Wombs. It features a picture of W.01, the first instance of Wombs, edited with a photo editor software and printed with an inkjet printer. Margherita worked on the print with white pencils in a way that evokes the representation of anatomical parts in religious devotional objects (called “ex-voto” in Christian religion). The aesthetics of the drawing interweaves devotion and desire, sacrality and taboos, and anticipates thus features that will characterize all the instances of Wombs.

In the installation W.02, the displayed glassware objects were realized to host two types of living cells: one extracted from the artist’s body and another from slugs. The objects present a poetical take onto borosilicate glassware, a fundamental component of the equipment of a biological laboratory even in times when single-use plastic items have become ubiquitous. Borosilicate glass is uniquely sturdy and resistant to high temperature, hence apt for heavy duty use and sterilization. Gestures like inoculating a culture of cell or micro-organisms, replacing media, or killing cultures may be seen as ways of taking care of life that challenge the repro-sexual understanding of gestation. Glassware and other technical equipment in the biolab sometimes remind of the shape of organs or sometimes simulate their specialized function– bladders, kidneys, hearts, lungs. Wombs dépasse l’organe physique et imagine un espace de possibilité, toujours multiple, qui transgresse les idées normatives de la vie et du compagnonnage.

The plural form of the title Wombs exceeds the physical organ and imagines a space of possibility, always multiple, that transgresses normative ideas of life and companionship. The displayed glassware is vintage glassware that was distorted by the artist in collaboration with flame worker Ivanka Pašalić of the Association Staklenj svjiet.

Margherita Pevere works in the field of bioart and performance, under an irresistible visceral signature. Her striking creations track the contemporary growing ecological complexity and the ways the incarnation and environment are still entangled. Her hybrid research, the biolab practice, the ecology, the studies on gender and death are crossed by an attitude of hacker. She finishes a doctorate in artistic research on bioart and the queer theories.