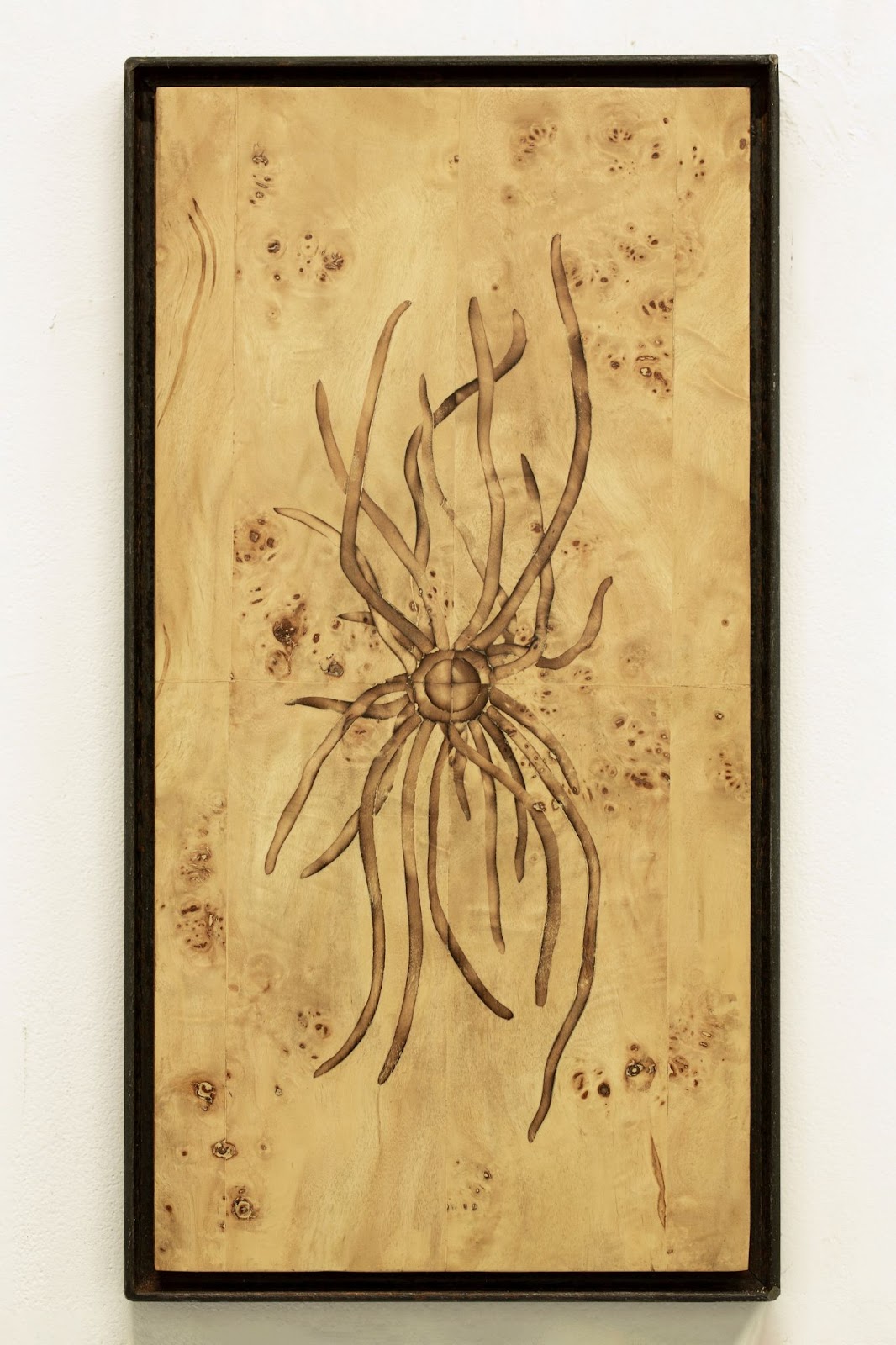 In residence at IMPAKT [Centre for Media Culture] (2021)

Apples Grow on Oaks is an attempt to create a visual symbol of the queer body as a non-normative subject submitted to a permanent trauma. The key words that surround the graphic element directly relate to the experience of the trauma treatments by non-normative sexual practices or BDSM (Bondage, Discipline, Dominance, Submission, Sadism, and Masochism). The symbol wants to appear as a hybrid of meristems – vegetal construction material that permit the growth and the division – and of galls – vegetal materials transformed and controlled by non-plant (certain herbivorous insects) that make them their own micro-habitat. These growths are called after the Latin galla (oak apple) or cecidia and after the Greek kikidion which signify all that gushes.

The title of the work derives from the poem for children of Jan Brzechwa “On the islands of Bergamut”, published in 1945. In the years 1950, an anonymous censor has qualified it as “anthropomorphisation, one of the worst of them all”. The reality presented in this poem may be considered as a utopia, a metaphor, a state impossible to achieve. According to the principles governing the therapy, traumas may be treated only by people who are already secure. What to do then for those to whom the world offer no base of security?

Strong Sisters Told The Brothers is a poetical manifest alluding to the lesbians and queer statements of the Radicallesbians (The Woman Identified Woman, 1970), The Lesbian Avengers (Dyke Manifesto, 1992) et Queer Nation (The Queer Nation Manifesto, 1990). Translated and modified by Liliana Zeic, it constitutes a collage immersing experiences that are articulated in the contemporary Polish reality. Showing how functions the heterosexual privilege, the artist encourages the public to reflect on her own proposal in this world of patriarchy domination and heterosexual norms. The work created is also a call to compassion, solidarity, and attention to the others.

Meristems, the plant-building tissues are where cell division takes place. It is there that galls can form. Certain insects create them as their microhabitats, seizing plant tissue in a way and controlling it. The galls become both a habitat and a food source for the insect, and can also provide it with physical protection against predators.

Liliana Zeic (Piskorska), born on 1988, is a visual artist and activist. In 2011, she studies in the University of Warsaw and in 2017, she finished there her doctorate studies at the Fine-Arts faculty. In her artistic practice, she analyses the social questions from a point of view feminist-queer, handles subjects such as the queerness or the non-heteronormativity and relies on her experiences lived in Central and Oriental Europe. Her work, based on video, photography, the object, and the text, creates intermedia and performing projects structures by the research.