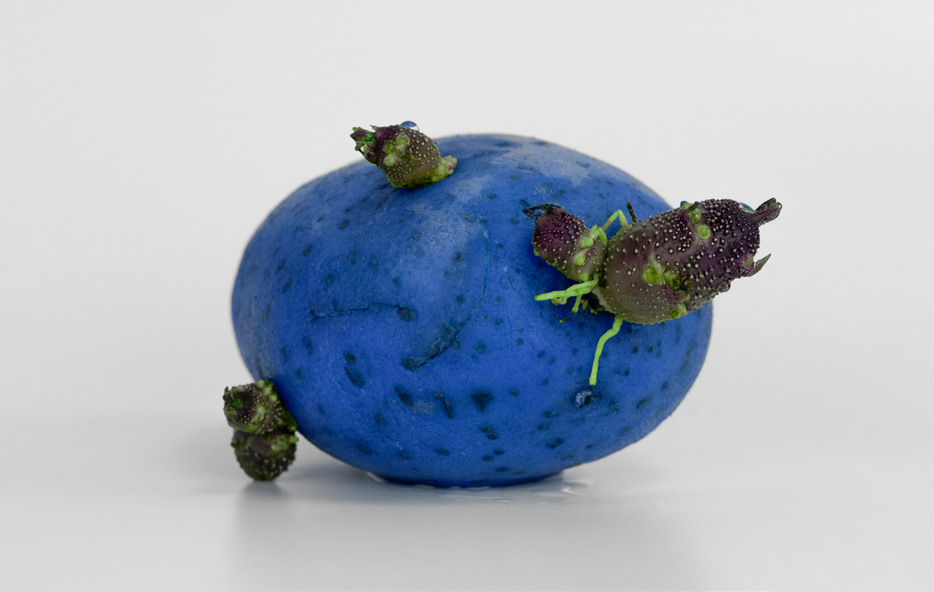 Paula Nishijima is interested by the mundane nature and yet in expansion of the potatoes. Their fleshy tuber shows knots – also called “eyes” – from which spring new shoots and roots. These eyes become then portals for new histories and definitions. Their growth multidimensional bodies carry in them the potential of different universes. The artist likes blue potatoes because they come from the sky and not from the earth.

In the series The anti-genealogy of particles, very inspired by Gilles Deleuze[9], the potatoes are not defined by their own nature but by their potential to “become blue”. Their anti-natural colour claims the right to diffuse particles that are not those we have inherited, but those that we have modified. The anti-genealogy of particles, très inspirée par Gilles Deleuze[9], les pommes de terre ne sont pas définies par leur propre nature mais par leur potentiel à « devenir bleues ». Leur couleur antinaturelle revendique le droit de diffuser les particules qui ne sont pas celles dont nous avons hérité, mais celles que nous avons modifiées.

Game of Swarms explores the way the living organisms work together without any central control to adapt to the changing conditions. Based on auto-organization and swarm intelligence theories – common to the collective behaviour of natural or artificial decentralized systems –, the work of Paula Nishijima is materialized by an audio-visual piece and a cooperative game which guide the participants towards new relationship forms more based on cooperation than competition. The rules of the game are co-created through a series of workshops open to the public.

With a biologist team from three different research centres, the artist concentrates on the collective behaviour of the ants, bees and of a viscous mold, Physarum Polycephalum, a protist with a rhizomatic form without brain, provided with a great learning capacity and complex problems resolution. She is interested by the study of these organisms because they present efficient systems that survive without control or hierarchy, but by the cooperation between the parties, calling into question the old principle of “the law of the strongest”.

“I am a visual artist whose practice, centered on research, is deployed at the intersection of the life science, technologies, and participative social practices. The relation between individual and collective motivations is at the core of my artistic practice, through which I explore how new sense, values and ethics are (co-)created by participative and collaborative processes. I search to explore individual identities as historical heritage of the social and cultural human constructions, encouraging their reassessment and the collective construction of new mode of relation to the world. I consider art as a means to provide the incarnate experience that is missing to the theory itself and help to report on new significations that emerge alongside to our society technologically mediatised. Such transformations involve new forms of ethical relationships between individuals and the systems, for which I aim to pass from controlling oppressive historical models to a collective power production”.