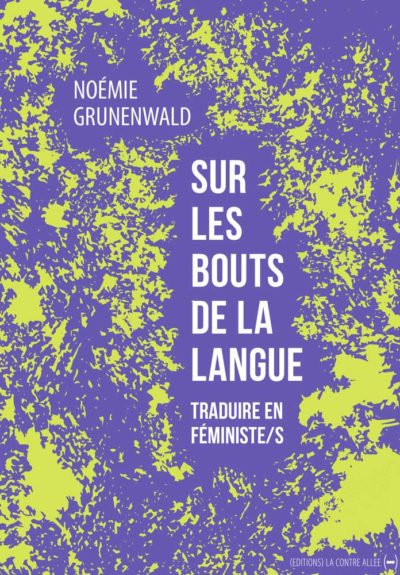 What the author says about it:

“Sur les bouts de la langue” is a narrative essay in which I explore the feminist stakes of translation from my own experience. I blend theoretical reflection and personal tale to interrogate the dominant conceptions of translation and demonstrate that the engagement in translation, far from being a supplementary means, permit to work better. I process the translation as a collective process that reveals the blind spots of the gender in the language and permits to concretely act on it and on the world that surrounds it. I finally tell of my first translations, the conditions in which they have been made and what they have done to me in the interior”.

Qu’as-tu fait de ta sœur? Is a free rein proposed to Reine Prat following the invitation that was made to her in November 2021 on the occasion to the publishing of her essay “Exploser le plafond. Précis de féminisme à l’usage du monde de la culture” at the Éditions Rue de l’échiquier.

Qu’as-tu fait de ta sœur? Is an interrogation, an invitation to come and meet the authors of whom the texts are an echo, in a manner or the other to the book of Reine Prat. The treated subjects are multiple. They all are from a feminist point of view, in an empowerment perspective.

Qu’as-tu fait de ta sœur? Is a program of literary meeting, on a bi-monhtly rhythm, in partnership with the bookstore La Plume de Sarthate that proposes each time a stand of book sales.

Noémie Grunenwald is a translator of English. She has notably translated Dorothy Allison, bell hooks, Silvia Federici, Julia Serano, Sara Ahmed, Minnie Bruce Pratt. With her years of experience in punk-feminist do-it-yourself, she funded the Hystériques & AssociéEs editions to accompany the publisher of authors marginalised by the editorial industry and to contribute to the diffusion of texts that have marked the feminist, lesbians or trans movements. She is currently co-responsible of the FELiCiTE (Féminismes En Ligne: Circulations, Traductions, Éditions) research program.

Reine Prat is a French Senior Civil Servant, with an aggregation in literature and honorary general inspector of creation, artistic teaching, and cultural action at the Ministry of Culture. She is the author of two ministerial reports, in 2006 and 2009, for the equality women/men in the sector of the living show in France. Reine Prat brings a unique reflection on the subject, as she decrypts the mechanisms which she observed from the inside and gives to understand the pluralities of voices by those who make the culture and arts today. (Feminism online: Circulations, Translations, Editions)